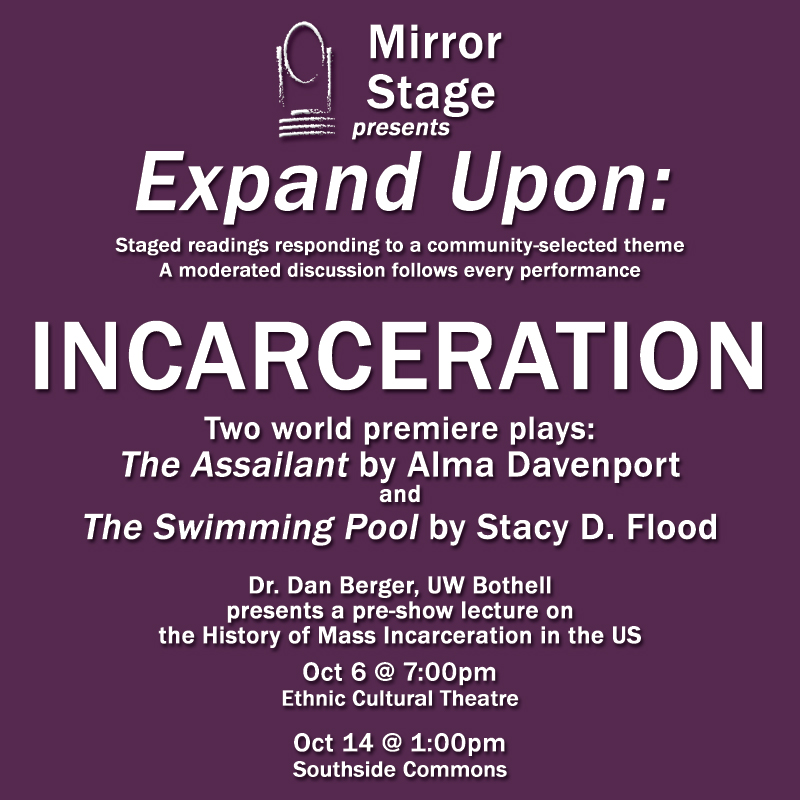 Dr. Dan Berger of UW Bothell presented pre-show lectures on the History of Mass Incarceration in the United States on Saturday, October 6 at 7:00pm at the Ethnic Cultural Theatre, and Sunday, October 14 at 1:00pm at Southside Commons, only.

Incarceration is one of the main forms of punishment and rehabilitation for the commission of felony and other offenses in the United States. The United States has the largest prison population in the world, and the second-highest per-capita incarceration rate. Prison Industrial Complex (PIC) is a term used to describe the overlapping interests of government and industry that use surveillance, policing and imprisonment as solutions to economic, social and political problems. The PIC is not just prisons, themselves; it is the mutually reinforcing web of relationships between prisons, the probation service, the police, and the courts, as well as all the companies that profit from transporting, feeding and exploiting prisoners, and so forth.

Theatre That Gets People Talking, Mirror Stage’s innovative staged reading series have been engaging the community in examining and discussing topical issues from different perspectives since 2004. Presented without costumes or sets, the emphasis on the text encourages audiences to create their own imagined world inhabited by the play’s characters, increasing empathy and expanding awareness. Following every performance, a moderated discussion with the audience and artists explores the issues raised in more depth.

Mirror Stage gratefully acknowledges the support of 4Culture, ArtsWA,
the City of Seattle Office of Arts & Culture, Humanities Washington, the National Endowment for the Arts and the Posner-Wallace Foundation.

Alma Davenport is a Seattle-based artist with roots in Washington DC and NY. She is the Founder and Producing and Artistic Director of Brown Soul Productions, an organization committed to developing and producing new work by women of color. Her body of work includes The Tenant, winner of the Lorraine Hansberry and Goldberg awards, Champagne James, winner of the Horowitz Playwriting Award, and Capital Punishment, Winner of the Gwendolyn Brooks poetry award, among other plays and poems. Alma graduated from the Duke Ellington School of the Arts and earned a BFA from New York University’s Tisch School of the Arts in Dramatic Writing. She is currently pursuing an MFA in Arts Leadership at Seattle University, and in the summer, works with City at Peace and Atlas Theatre in Washington DC, helping teens create musicals based on their life stories. Alma also serves on the board of directors for Northwest Family Life, which provides safe temporary housing and counseling for victims of domestic violence and human trafficking.

Stacy D. Flood has been a finalist in the Ashland New Play Festival, and an artist-in-residence at the Haut de Fee Centre in France, La Serrania in Mallorca, DISQUIET in Lisbon, and The Millay Colony of the Arts in New York. Locally, his work has appeared at ACT, Ghost Light Theatricals, Theatre Battery, Theater Schmeater, the Akropolis Performance Lab’s New Year/New Play salon, Playlist Seattle, the Adaptive Arts Theatre Company’s Night of New Works, Macha Monkey’s Distillery series, FUSION Theatre Company’s ‘The Seven’ Short Works Festival, as well as in SOMA Magazine, Seattle Weekly and Starbucks’ “The Way I See It” campaign. Stacy holds an MA in English, an MFA in Creative Writing from San Francisco State University, where he has served as a lecturer, and was awarded a Clark/Gross Novel Writing Award. He has also been awarded a Getty Fellowship to the Squaw Valley Community of Writers and a Gregory Capasso Award in Fiction from the University at Buffalo.