“…as much bravery onstage as there must be in the real lives of those who own these stories.”—TheaterTimes.org 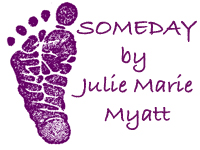 at the Ethnic Cultural Theatre in Seattle, WA

In the wake of recent legislation threatening to defund Planned Parenthood, criminalize miscarriages and mandate IRS “abortion audits,” Mirror Stage was thrilled to present SOMEDAY by Julie Marie Myatt as the April 2011 Feed Your Mind selection.

Having a baby can be a daunting task. In today’s economy, who can afford to have—or not have—children, and who can’t? A single woman fights to adopt an abandoned baby, while a middle-class couple struggles to conceive. Will they get the families they dream of… and at what cost? Timely and relevant, SOMEDAY draws on testimonies from women with disabilities, surrogates, sperm and egg donors, IVF users, reproductive rights advocates, non-traditional families, and letters sent from across the country to the Women’s Reproductive Rights Assistance Project in Los Angeles. Following the performances, a discussion with the audience and artists further explored the issues raised in more depth.

Julie Marie Myatt’s play Someday premiered as part of Cornerstone’s Justice Cycle in Los Angeles in 2008. The Happy Ones premiered at South Coast Repertory and was produced by Seattle Public Theater March 18 through April 10, 2011. Welcome Home, Jenny Sutter premiered at Oregon Shakespeare Festival, and toured to the Kennedy Center. The Guthrie Theater commissioned Boats on a River, a finalist for the Susan Smith Blackburn Prize. My Wandering Boy premiered at South Coast Rep, and The Sex Habits of American Women premiered at the Magic Theatre in San Francisco. Ms. Myatt is currently working on commissions for the Guthrie Theatre, Denver Center Theatre Company, ACT Theatre, and South Coast Rep. She received a Walt Disney Studios Screenwriting Fellowship, a Jerome Fellowship at the Playwrights’ Center, a McKnight Advancement Grant, and is a member of New Dramatists.