“slicing and poignant… ✮ ✮ ✮ (out of four)”—Chicago Tribune 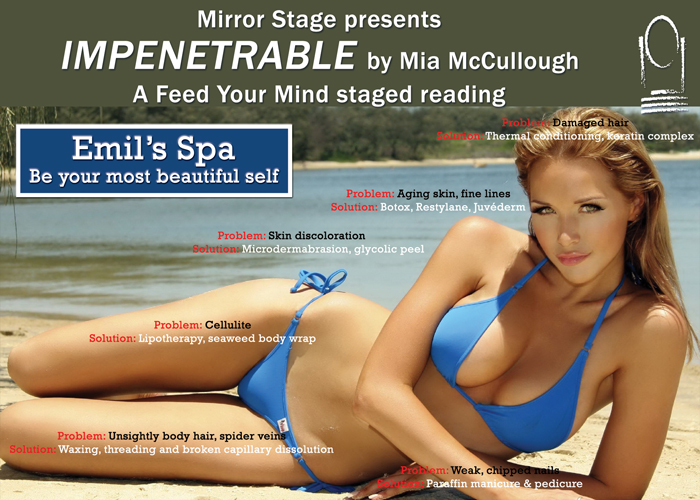 Based on actual events, Impenetrable takes on society’s obsession with appearance in a compelling yet deeply funny way. A local spa’s billboard dissects a gorgeous, bikini-clad woman highlighting “problems” and cosmetic “solutions,” outraging the residents of a well-to-do suburb. This single image irrevocably changes the town and its residents’ perceptions of themselves. Following its critically-acclaimed World premiere at Stage Left Theatre in Chicago, Mirror Stage was proud to present the West Coast premiere from Mirror Stage favorite, Mia McCullough (Chagrin Falls, Echoes of Another Man, Spare Change, and Anatomy of Pain). A moderated discussion with the artists followed both performances.

Mia McCullough’s plays have been produced in Chicago at Steppenwolf Theatre Company, Stage Left Theatre, and Chicago Dramatists; and around the country at theatres such as Actors’ Express in Atlanta, InterAct in Philadelphia, Mo’olelo Performing Arts Company in San Diego, the Victory Theatre in Los Angeles, and Cincinnati Shakespeare Festival. Impenetrable is the fifrth script by Ms. McCullough to be presented in the Feed Your Mind series following Chagrin Falls in 2005, Echoes of Another Man in 2006, Spare Change in 2007, and The Anatomy of Pain in 2012. Her break-through play Chagrin Falls garnered many awards including the American Theatre Critics Association Osborn Award, first prize in the Julie Harris Playwriting Competition, and a Joseph Jefferson Citation for New Work. Since Africa was commissioned by the Cincinnati Shakespeare Festival and was a finalist for the Susan Smith Blackburn Prize, and a nominee for a Joseph Jefferson Award for Best New Play. Ms. McCullough is currently adjunct faculty at Northwestern University, a resident playwright at Chicago Dramatists and a member of the Dramatists Guild.