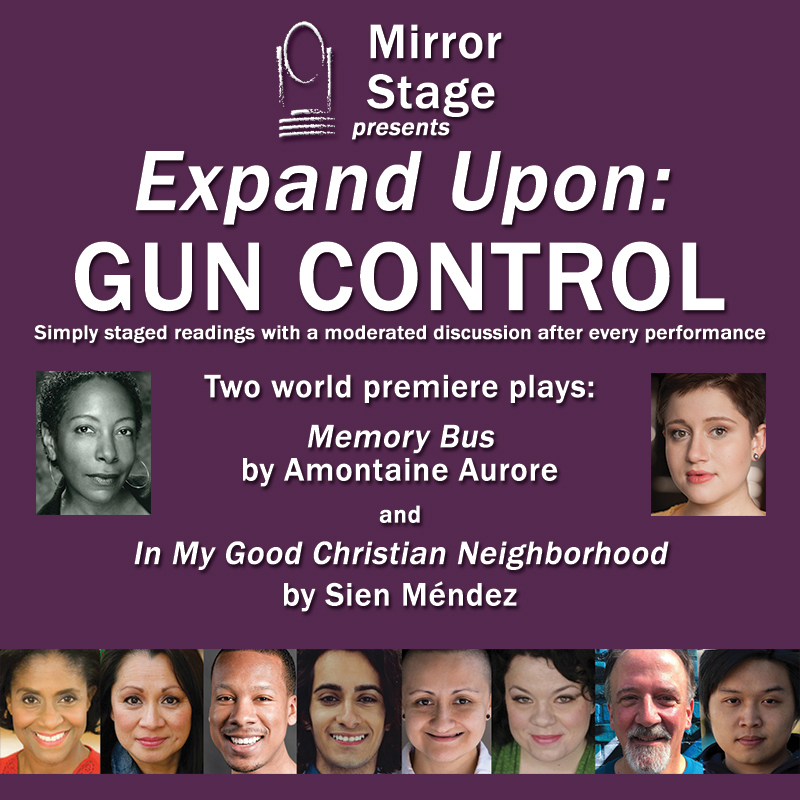 ONLINE ZOOM PERFORMANCES DUE TO COVID-19

For the fifth round of Expand Upon, the community selected the theme Gun Control, and Mirror Stage commissioned Memory Bus by Amontaine Aurore and In My Good Christian Neighborhood by Sien Méndez. Directed by Suzanne M. Cohen, Expand Upon: GUN CONTROL featured Angie Bolton, Eloisa Cardona, Jonathan Keyes, Mario Martinez, Jordi Montes, Rachel Permann, Kevin Shannon, and Andy Tran, with a moderated discussion following every performance. Click the file below to view the program:

ExUp5Program-online
You can watch the pre-show lecture by Dr. Margaret Heldring on our YouTube channel at https://youtu.be/7uViEUEszoc

The United States has 120.5 guns per 100 people, or about 393,347,000 guns, which is the highest total and per capita number in the world. Nearly one in four Americans (22%) own one or more guns (35% of men and 12% of women). America’s pervasive gun culture stems in part from its colonial and revolutionary roots, as well as a history of frontier expansion. The Second Amendment of the United States Constitution states: “A well regulated militia, being necessary to the security of a free State, the right of the people to keep and bear Arms, shall not be infringed.” Proponents of stricter gun control laws believe the Second Amendment was intended for militias; that gun violence would be reduced; and that a majority of Americans, including gun owners, support new gun restrictions. Opponents counter that the Second Amendment protects an individual’s right to own guns; that guns are needed for self-defense against a range of threats from local criminals to foreign invaders; and that gun ownership deters crime.

Click on the files below to view the lobby displays:

Firearms in our community

Mirror Stage gratefully acknowledges the support of 4Culture, ArtsWA, City of Seattle Office of Arts & Culture, the EPS Fund, the National Endowment for the Arts, and the Posner-Wallace Foundation.

Amontaine Aurore is a writer, actor, director, and author of numerous plays which have been presented on stages in Seattle, New York, and abroad. Her solo play, Free Desiree was named by Indie Theater Now as one of the Best New Plays of the 2013 New York Fringe Festival. In 2017 her play, Don’t Call it a Riot! was a finalist in the Bay Area Playwrights’ Festival, and had its world premiere in 2018. Amontaine is the recipient of artist grants from Artist Trust, Seattle Office of Arts and Culture, 4Culture, and the Puffin Foundation. She has been a writer-in-residence at the Hedgebrook Writers’ Retreat, and was named a finalist for the 2019 Emerald Prize in playwriting. Sien Méndez is a multi-disciplinary theatre artist who has been based in Seattle for about three years and hails from Houston, Texas and San Juan, Puerto Rico. Their plays, which include  [A willow and no window,], Boson (finalist: The Scratch), Joke Scarcity, and Ozark National Forest have been seen at Cornish College of the Arts and Seattle’s Mirabella as well as recognized on New Play Exchange. Their short play, somos un bosquejo was published through Cornish’s In Other Words in 2018. As an actor, Sien has been seen at Seattle Children’s Theatre, Seattle Public Theatre, Book-It Repertory Theatre, Seattle Shakespeare Company, and The Scratch, and was recently the dramaturg and assistant director of Washington Ensemble Theatre’s Dance Nation. Sien is a teacher of playwriting and new play development at various elementary schools in the North Seattle area, and a board member of Seattle’s newest theatre group The Collective We. They hold a BFA in Original Works from Cornish College of the Arts. Listen to find out “What’s on TAP” as the TeenTix Arts Podcast goes behind the scenes with the playwrights of Expand Upon: Gun Control. In this episode, you’ll hear from Amontaine Aurore who wrote Memory Bus, and Sien Méndez, the author of In My Good Christian Neighborhood.

Listen as the TeenTix Arts Podcast goes behind the scenes with the Mirror Stage actors. In this episode we’ll hear from actors Angie Bolton, Eloisa Cardona, and Andy Tran about being part of the staged readings of Mirror Stage’s Expand Upon: Gun Control production.